VIEW ALL
|
Sweet Salvage  NEXT
Share article Sweeteners on:

With so many different sweeteners available at Sprouts, it can be tough to decide which one to buy. Are honey, agave nectar and coconut sugar healthier than table sugar? To help you decide, here’s the real deal on 11 common sweeteners. 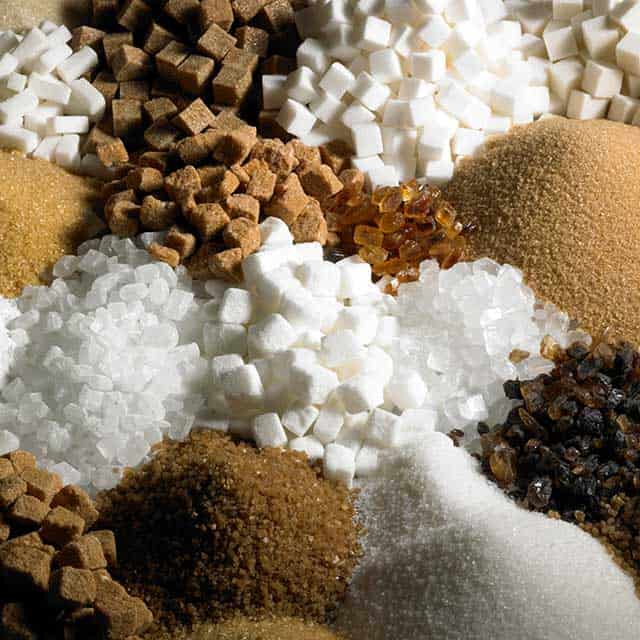 Agave is similar in taste and texture to honey, but without all of the nutrients. Agave, however, is lower on the glycemic index than honey, so it’s a case of picking your battles. Best for adding a touch of sweetness to smoothies and iced drinks.

Brown sugar gets its distinctive color due to the presence of molasses. Nutritionally, brown sugar and white sugar are not much different. Best for bringing caramel flavor to cookies, brownies, darker cakes (like carrot cake) and quick bread. It’s also great for topping oatmeal, fruit crisps or crumbles.

Made from boiled down sugarcane, it has a nice, mellow caramel flavor and is a good vegan substitute for honey. It’s about 50/50 fructose and glucose. Best for lightly sweetening iced tea and cocktails, as well as coffee cakes and biscuits.

Like raw honey, coconut sweeteners contain a variety of minerals, 17 amino acids, vitamin C, and nearly the entire B complex. Coconut sugar is low on the glycemic index and also has a neutral pH balance, so it does not add acidity to the body. Best for using as you would use brown sugar. It has a nutty flavor, but does not taste like coconut.

Corn syrup is almost exactly as sweet as the granulated sugar it often replaces in recipes. It can be naturally light in color, which is often used for candy making and baking. The advantage of corn syrup over sugar is its resistance to crystallization. The most controversial form of corn syrup—high-fructose corn syrup—is rarely sold directly to consumers. Best for setting up pecan pie, peanut brittle, popcorn balls and homemade candies.

Refined white sugar is pure sucrose. It can be produced from either sugar cane or sugar beets, but by the time it has been refined to a white crystal, the two are chemically identical. Pure white sugar has been processed so it has few minerals and antioxidants. Best for making sugar cookies, meringue toppings and delicate fluffy cakes.

The processed honey that is found in most pantries is no better than table sugar; raw honey, however, is a different story. Raw honey is considered to be a superfood by some, as it contains antioxidants, minerals, vitamins, amino acids and other nutrients. Raw honey is an acceptable substitute for table sugar, provided that it isn’t used in excess, as honey does contain sugar. Best for providing a sweet delicate flavor to dressings, marinades and slaws.

It contains small amounts of polyphenols—antioxidants that help quell inflammation. It holds the middle spot on the glycemic index in comparison to other sweeteners, and does have a few health benefits, as it contains some minerals and antioxidants. Best for flavoring pork with a glaze or as part of a marinade or salad dressing. Also great for pouring on pancakes, waffles and French toast, of course.

Molasses has the highest antioxidant levels of all sweeteners and provides a good source of niacin, thiamin, magnesium, copper and potassium. It is a byproduct of processing cane juice into white sugar. Its flavor is bittersweet and deeply rich so use it in small doses! Best for adding distinct flavor and a hint of sweetness to baked beans, homemade barbecue sauces, brown bread and ginger cookies.

It has been shown that stevia is much sweeter than other sugars, meaning that only a small amount needs to be used. The body also processes stevia very slowly, which greatly reduces the risk of a sugar high. In addition, it is essentially calorie-free, which is why it is popular with dieters. Best for sweetening up a cup of coffee or a cold drink.

Turbinado or “raw” sugar, is also a dehydrated cane juice. It retains a bit more of the natural “impurities,” so it’s even a little darker, and the molasses aroma and flavor is a bit more pronounced. Best for topping cookies and breads with a sugary crackle.